A Tribute to a Not-so-Monstrous Lady

I proposed to her right there at the Eiffel tower!" gushes the fresh-faced young man at the table next to us. We're sitting in a sports bar to watch a baseball game, and his interjection comes uninvited.  I'm one part annoyed by his interruption and one part intrigued by the similarities between the fervor of sports fans and young lovers. I'm in no part focused in his story.

"People were clapping and cheering for us. They threw money, lots of money, at us, like tens and twenties," he continues, unfazed by our lack of enthusiasm for his tale. "We got like $250 that night!"  And that's when I realized he was talking about the Eiffel Tower in Las Vegas... 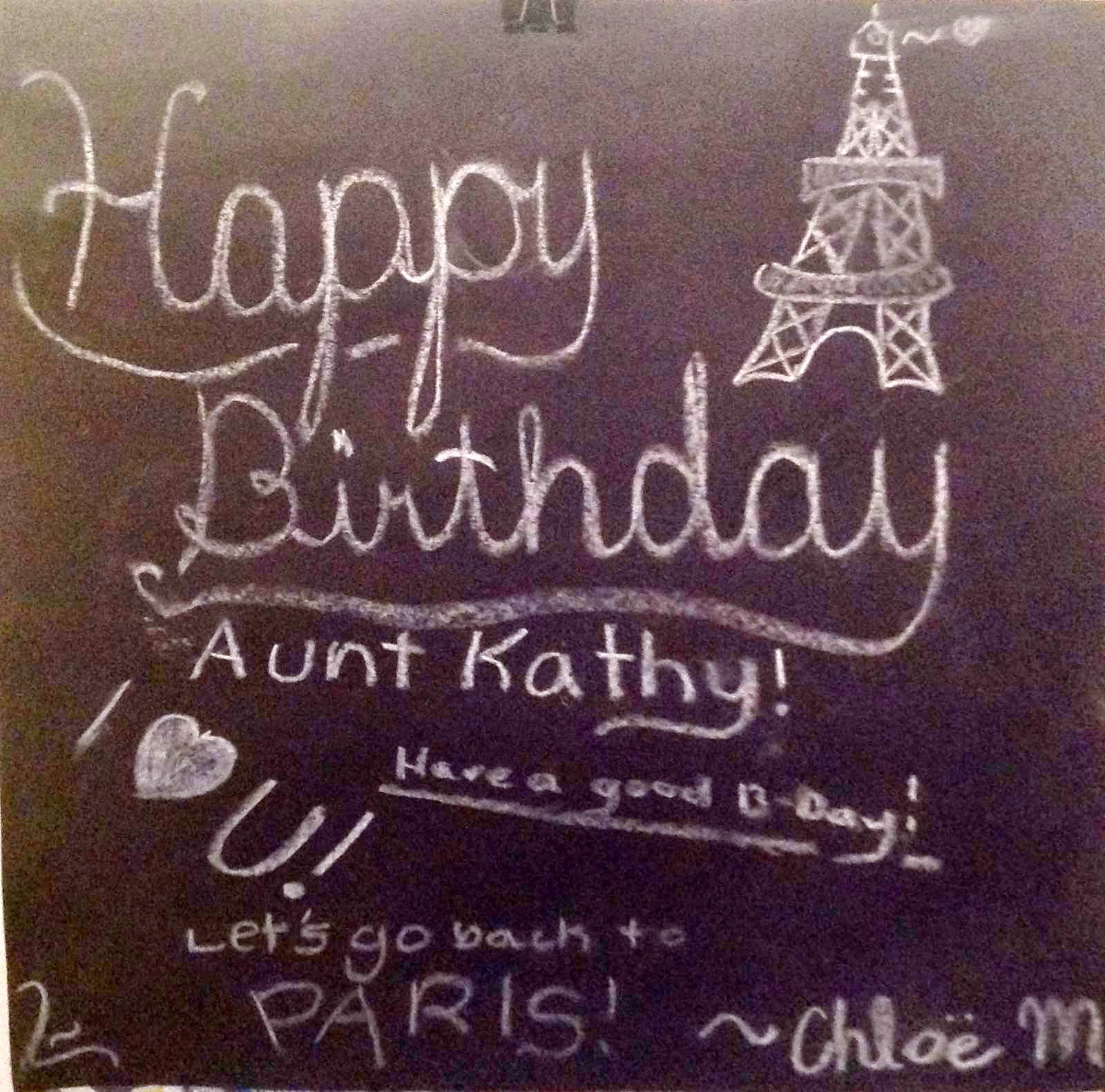 The Eiffel Tower was on my mind again this morning when I awoke to see my daughter's drawing of it which hangs on the wall of the guest room at her aunt's house. The coincidence of the young man's outburst the previous evening and seeing her drawing first thing this morning has me musing about the Iron Lady.

Our whole family went to Europe together a couple of years ago, and Paris was the last city on our jam-packed itinerary. We were all travel-weary by the time we got there.

Some of the lifts at the Eiffel Tower were out of commission when we were in Paris, and tourists were standing in ticket lines for hours, just to get a ride to the top.  We opted not to devote our few precious hours (and flagging energy) in Paris standing in line or making the stair climb in the hot sun. We told ourselves that missing the view from the Eiffel Tower would give us a reason to return to Paris, much as our coins in the Trevi fountain assured our return to Rome.

We settled for a nighttime stroll around her massive legs. Suddenly, the 5 billion lights adorning the Eiffel Tower began twinkling rapid-fire, looking more like a glimpse into the Milky Way than a mass of ten thousand tons of iron.  We were as surprised and elated as if the Mona Lisa had suddenly begun to sing when we were at the Louvre.

On the last day of our trip, Aunt Kathy had said, "Of all the cities we visited on this trip, Paris is one place I don't feel any need to come back." I felt I'd failed Paris. I've loved Paris since I came here as a teen on a student tour. That trip was my first without my parents, my first trip outside the US—and my first plane ride anywhere.  I stayed with a Parisian family who treated me like their own daughter.  "Ma fille américaine," my French dad called me. I felt I have done a disservice to the city of my adopted family.  "But we were here such a short time," I protest, "and we were exhausted. There's so much more to Paris than what little we saw!"

Fast forward a month, and we're all gathered to reminisce and share "favorite moments" from our trip. "There's something about the Eiffel Tower," Aunt Kathy muses.  "It affected me in a way I didn't appreciate at the time." I can only nod, my heart too full to speak. Today, I wander around her home and count no less than a dozen renditions of the Eiffel Tower—from the gift bag she gave me last night to the blue glass bottle sitting atop a platter emblazoned with a map of Paris.

While the Eiffel Tower is recognized around the world as a much-beloved symbol for Paris today, it was not an emblem that was readily embraced.  Three hundred artists, including the most notable of the French arts establishment, penned a letter of protest demanding a halt to the construction of "this useless and monstrous Eiffel Tower," a “hateful column of bolted sheet metal."  Aunt Kathy's comments make me realize that it is just as impossible to predict the impact of the great iron lady today as it was for those famed artists who had not yet set their sights on her.

What is it about the Eiffel Tower? Every person I know who has been to experience it has shared a tale of an intimate experience.

"We snuck a bottle of wine to the top."

"We didn't have money for the lift ticket but we were on our honeymoon so the guard to let us ride."

My own first memory of the Eiffel Tower was of my French dad carrying my girly purse for me as we climbed the 300 steps to the 1er étage. My own father would not have been seen sporting such a decidedly female possession.  As terrified as I was of heights, I gratefully accepted French dad's offer—and the opportunity to grab the handrails with both hands.

"Let's go back to Paris!" reads the script on my daughter's drawing.  Judging from the number and variety of Eiffel Tower renditions in Aunt Kathy's home, I'm thinking that she doesn't need much convincing.

Why this column of bolted sheet metal commands the hearts of so many people, I can't say.  I'm content to know that the great Iron Lady continues to inspire my family to dream and adventure, and, for this, I say "merci beaucoup."
Posted by Cheryl Leutjen at 6:25 PM