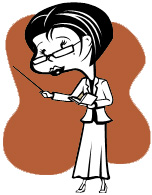 Butt in the air, nose an inch from the carpet, I burst out laughing. Loudly. I'm on the slant board at the YMCA in Glendale, hanging my upper half off of it, in hopes that my achy lower back will release. The workout room is relatively empty, so there aren't many witnesses, though I don't much care if there are. This is not, by far, my biggest outburst here. I've been coming here to dance with Darcel for years. Freed by the emotional release of her give-it-all-you-got classes, I have worked these machines with big tears rolling down my cheeks more times than I can remember. From the sadness over closing of my beloved store, to the panic over my mom's cancer diagnosis, across the daily trials of raising children and throughout all my days of grief over her passing, I have worked out a lot more than my muscles in this space.

Still, it does occur to to me that laughing loudly in this precarious position is a bit unusual, even for me. My moment of mirth is inspired by a sudden recollection of my son's pained expression from the night before. Cameron is an avid Minecraft player, and he wants nothing more than for me and his father to play with him in the virtual worlds he creates there. When he invites me, I protest that "I don't like video games," and " I just don't get it." Still, he persists. And I am so grateful, because I continually remind myself, I am blessed to have the opportunity to spend time with him in his world. I'm honored to be invited.

A couple of months ago, he invited me in to his room for an introductory lesson in the operation of basic controls in Minecraft. I was so slow to learn that he got increasingly frustrated. He finally dumbed-down the lesson to match my skills. "Let's find SOMEthing you can play, Mom." He found a nice bubble popping game that I actually enjoyed. I think I could have mastered it, given the chance. After a few minutes of play, however, the realization of the level to which this lesson had sunk came over him. He shook his head and took the controller from me. "That's enough for today, Mom," he said, and ushered me out of his room. His disappointment in my performance weighed heavily on both of us.


Eventually, the pain of that experience waned and he was ready to try again. "So when are you coming for another lesson in Minecraft, Mom?" he asked, repeatedly. "Whenever you muster the courage to try again," I say, only half-kidding. Last week, he took a page from my play book and he notified me that he had scheduled an appointment for us on Sunday at 4pm.

Cameron has always always struggled with transitions. When he was a toddler, I learned to give him the 20-, 5- and 1-minute warnings: "we're leaving soon," then, "we're leaving in five minutes," then "gather your toys, it's time to go," and finally, "get in the car now" to avoid the inevitable tears and tantrums. Now that he's 13, he prefers to have warnings several days in advance, however. "We're going to visit with friends at their house on Friday night," I Skype to him on Tuesday. "Remember we go to Veronica's house tonight," I tell him on the way to school. "Three hours until we leave for Veronica's," I say at the school pickup place. "Time to get in the car now..."

I'm pleased, then, to receive his Skype message of "Minecraft class Sunday at 4pm," he Skypes me on Thursday afternoon. How nice to be invited, for a change! "How about 4:30?" I Skype back. "I am volunteering at the Community Garden event until 4:00." Long pause. He types quickly, my son, so I know he's contemplating his response carefully. Too snarky, and I might cancel altogether. Too nice, and, well, he just might make himself sick. "If that's the best you can do" is what eventually appears on my screen.

I was running late on Sunday after the community garden event, but eventually Cameron's Dad, David, and I assembled in Cameron's bachelor pad accommodations in his bedroom for our lesson. Cameron beams at his most unlikely students. He summons the most patient explanations of pickaxe capabilities and strengths that he can muster. I struggle to follow along.

I totally understand the allure of Minecraft, and, if it had existed when I was his age, I'm sure I would have been all over it. The opportunity to create to new worlds with a panoply of tools and resources is alluring indeed. What kid wouldn't want to be able to create a world where your home is filled with your favorite games, and there are no teachers or parents telling you what to do all of the time, and you can eat pizza for every meal, and you can let a pig roam the palace and mine gold whenever you feel like it? Who wouldn't want to fire up a roller coaster of your own imagination with the magical redstone? Who wouldn't want to have the opportunity to teach your dumb parents about something that you do so well and they just can't seem to understand?

My good intentions don't always match my skill level, however. Yet Cameron seems encouraged by our enthusiasm for his subject this evening. David even has the comprehension level to ask questions that, judging from Cameron's facial expressions, he feels are worthy of his time. "Yes, Dad, there is the possibility of inengag a ekioghen with a weilalk " is what it sounds like to me. I just nod and smile, so happy that my boys are doing something together.I'm glad for the opportunity to sit back and admire my bright son, working in his element. I'm thrilled to be included.

"Here's a link to your test," is the Skype message I receive the next day. "It's only five questions. Please try to complete it right away." Eager to stay in his good graces (there are so many, many, many ways that I stray out), I click on the link immediately. "What's the first level of pickaxe that can mine iron?" is the first question. Already I'm in over my head. I remember that he went over this. I remember that he emphasized the strengths of each level of pickaxe. I even remember that there was something nonsensical (to my geologic mind) about the order of it, but what was it? Wood can cut stone? Or was it gold can cut iron? Rats. I have to guess on the answer to the very first question.

I read the second question, and I realize that I am as unsure about it as the first.  I feel better about my response to question #3 and I'm sure I've nailed the answers to questions 4 and 5.

A couple of hours later, I come down from my office in the attic, and I poke my head into Cameron's room. "Time to get ready for bed," I say. He turns to look at me with a most pained expression. "You got two questions wrong, Mom. TWO out of FIVE." I can see that this information is causing him emotional, intellectual and even physical distress, as if he might double over any moment as he did when his appendix ruptured. "How can you possibly get two out of five very easy questions wrong, Mom?" he asks plaintively. I see pity in his grey eyes and bewilderment in his face. He has done his best as a teacher, and the student has failed the exam. I feel deep remorse. I apologize profusely, knowing full well that it's not an apology that he wants.

It is his look of grief and pain that comes to me again as I am bent over the slant board at the Y. While his expression of disappointment was heavy and sorrowful the night before, it strikes me in this moment as strangely and hilariously funny, in the way that only something which is desperately - and wholly - inappropriately funny can. My daughter Chloë and I recently stifled laughs at the end of the memorial service for a dear friend's parent because AutoCorrect changed my text message from "we're going to the reception now" to "we're going to the revolution now." That would be funny enough on its own; coupled with the "MUST-NOT-LAUGH-HERE" element, however, made it the kind of funny where milk comes out of your nose, even if you're not drinking any. Even if you're lactose intolerant and haven't drank milk in years.

Cameron's doleful expression revealed just how much he wants me to learn Minecraft so that we can play together, so that I can be a part of his world. I'm thrilled he wants me there. The last thing I'd ever want to do is to crush his hope for me, especially at this critical juncture of his transition into teenhood. And yet, here I am in this most awkward position, in a semi-public place, howling at his clear expression of pain over my pathetic inability to grasp even the most basic concepts of something he finds as natural as when we were first teaching him to walk. He looked at us then in the same way I look at him now: "I get that it's cool to do what you do, and I appreciate that you think I can do it, too. I just have no idea where to begin."

When I regain my composure, I ask myself, "why, exactly, was that so freaking funny?" It occurs to me now that, perhaps, as is so often the case with humor, it's because I see myself in him. One of my greatest fears as a parent is that I'm not teaching my children all that they will need to know to be self-sufficient, self-supporting, kind and compassionate, practically grounded spiritually guided adults. "I should be making them floss more, cook more, clean more, get outside more, shower more.." and a whole host of other 'shoulds' too numerous to mention.

I'm laughing because I take my teaching job too seriously. This job of teaching my children is not at all like a traditional school where the system sets the teacher up as Knower of All Things and the role of the student is to memorize and regurgitate. Children - and all of us - learn best by observing and then doing. I am doing what I want them to model, though I'm not perfect, and that's part of the lesson, too. "Do what you feel called to do, take some time to assess, learn from your 'mis-takes' and get back out there and go do again." That's what I'm modeling, and that's what they are learning. The simple fact that Cameron set an appointment with me, followed up the lesson with a survey, both things I do on a regular basis to connect with my children, means he IS learning from the best I have to offer. Offer, invite, follow up, assess, reconfigure the lesson, offer...repeat.
I am grateful to know that I am teaching what I want my children to learn, after all. I am overjoyed that Cameron is such an asute learner. And I am blessed that he is my Teacher.
Posted by Cheryl Leutjen at 6:21 PM No comments: