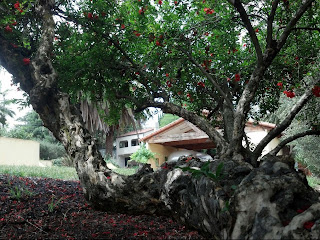 My back against a twisted and wizened old pomegranate tree, I hear a hum of buzzing overhead. This tree is flowering profusely and ecstatically, hundreds of vibrant orange flowers gracing its slender branches. Whereas I once would have been afraid to be so close to so many bees, now I am glad to be in their company. I know how they are threatened, these busy creatures whose industry makes possible nearly a the third of the human food supply which depends on pollination. A hummingbird drops in and hovers above my head, the hum of his rapidly flapping wings an octave lower lower than the bees. I am surrounded by creatures whose work is to extract and share the sweetness nature offers. I feel blessed. I feel forgiven.
Earlier this morning, I had been feeling low. I had been contemplating the part I have played in creating the disastrous environmental conditions that exist on the Earth today. While it is tempting to blame the Corporations, the Government and the Rich, I know I must accept that I have been their unconscious partner.
I have preferred unblemished fruit over their bruised siblings because they look more appealing. I have purchased items made of plastic made in faraway places instead of items made of renewable sources made by local artisans simply because the plastics were cheaper. I have driven my car when I could just as easily walked.
A part of me wants to shout, "but that's that's what I was taught to do!" It is true that I have learned my habits from my well-meaning parents who made choices fueled by their desire to give my sister and me the most and the best they could. Having grown up in the fifties, they were the first generation who had so many options available when choosing how to provide for their families. Who wouldn't choose the best-looking fruit for to feed their children? Who wouldn't choose toys without the sharp metal edges that could cut little fingers?  Who wouldn't want electric appliances so mom had more free time to enjoy with her family?

My grandmother got married in 1931 at the age of 22 and gave birth to my mother, her only child, at the at the ripe old age of 31. I once asked my cousin, a contemporary of my mother's, "what on Earth did my grandmother do for those nine years? She didn't work or volunteer and she had no children." His response made me realize how much a product of my own time that I am.

"Running a household back then was a full-time job back then. There were no frozen or commercially canned foods. People still grew and canned much of their own food. They made their own bread and cake from scratch. There weren't any freezers to keep food for long periods, so cooking was a constant and daily chore. They sewed most of their own clothes and household linens. Laundry was scrubbed in a tub and hung out to dry. There were no wrinkle-free fabrics or electric irons. And, in the 1930s when your grandmother was a young housewife, there was no extra money for luxuries like paying for help. In those days, keeping house, whether or not there were children living in it, left little time for navel contemplation."
Recalling his words now, I suddenly understand how those same people, my grandparents, could be the ones who fed me canned fruit, packaged treats and soda pop.Sure, they still grew their own summer vegetables, sewed clothes for us grandchildren, and put clothes out to dry on the line in nice weather. After decades of long hours of work devoted to sustaining a home and garden, however, those newfangled convenient products must have seemed like a godsend, freeing them from the labor their parents endured throughout their entire lives.
It's no wonder my mother's generation so quickly embraced the canned soups, the TV dinners, the Bisquick, and boxed cake mixes; how glad they must have been to buy that washing machine, the dryer, the electric skillet and the microwave. This was the dawning of the Women's Lib movement, and the technological advances made their movement possible in a way that the suffragettes could not have even imagined.
There's no point along the timeline of Modern Progress where I can criticize my forebears for the choices that they made that created and fed our current environmental challenges. None of them were evil people intent on destroying the planet. Nor, I suppose, were the companies who invented, manufactured and sold the convenient foods and gas-guzzling cars that they bought. They were simply providing what my parents and grandparents wanted. We all thought, in our own way, that we were making choices that made life better.
And yet it still pains me to think of anyone intentionally poisoning our air, water and land with toxic substances. I want to lash out and blame the people who turned a blind eye to the dead fish lining the banks downstream of their plants, to the demise of songbirds because of pesticides they produced and to the lives shortened because of exposure to toxic chemicals. I want to blame those bad companies, their owners and managers for putting us on the path of over consumption and valuing production at the peril and detriment of nature today. Surely, they are the ones to blame.
However, I recall and must confess what I myself knew. In college in the early eighties, I majored in interdisciplinary ecology, a program through which I considered the challenges facing our planet from sociological, economical, philosophical, religious, biological and geological perspectives. I read Silent Spring (1962), Small is Beautiful (1973) and Diet for a Small Planet (1981). I did a term paper on the impacts of global overpopulation. I knew as well as anyone the impacts of our modern lifestyle on our planet.  In 1981, I was even featured in an article in the local suburban newspaper which read, "Stephens College sophomore Cheryl Leutjen of Gladstone is concerned about the world's dwindling energy resources and deteriorating environment - and she is determined to do something about it."

What did I do about it? I bought a car that achieved 50 mpg, a phenomenal efficiency even by today's standards (and nothing short of miraculous in 1985). I bought my fruits and vegetables from the local natural foods market. I recycled my bottles and cans, which, back then, meant taking them to a recycling center. I gave money to Greenpeace. And I went on to live my life, pretty much the same as anyone else. Hardly the kind of bold action implied in the article.
Here I am, nearly thirty years later, wondering how I could possibly have failed to employ that determination I once had. I recently watched "An Inconvenient Truth," and I considered the sharp contrast between my life and Al Gore's. He, too, learned about global warming in college, several years before I even graduated high school. He has been talking to people about it ever since. Because of Al Gore's political offices, he has had the position and name recognition to reach vast audiences. However, lack of notoriety is not an excuse for my silence, my inaction.
For this, I was chastising myself before stepping into the hummery. How can I blame anyone else for their contributions to environmental degradation when I, who admittedly had all the knowledge, as well as the passion to make a difference, went to sleep for nearly thirty years?
Sitting here in the healing hummery I understand that it is time to forgive everyone, myself included, for the parts we have played. Blaming and berating ourselves and others solves nothing. The past is simply the vehicle that has driven us to the Present moment. I do not curse my car for taking me to a place I wish I had not gone. I put myself back in the driver's seat and chart another course.

The busy, busy bees humming all around me are telling me, simply, to get back to work, and that there's no more time for pointing fingers or self-flagellation. We have all played a part in creating the conditions on Earth and we all have the opportunity to engage in the healing of our relationship with her.  I take a moment to speak a word of gratitude for my nature partners who are entreating me to act. Indeed, it is only in partnership with all All of Us that we may chart a new course for our existence on Earth.
Posted by Cheryl Leutjen at 2:32 PM