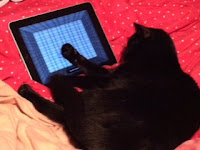 To the cat, nothing is sacred.  She will play with a diamond ring as carelessly as a rubber band.  Oh, she is clever enough to pretend to respect our boundaries when we are in the same room.  She waits until I'm asleep to lick the gingerbread house I made.  She waits until the bathroom is empty to knock perfume bottles to the floor. She waits until I leave the house to steal pens from my desk.
In my presence, she plays with items that I have pre-approved; rubber bands and paper wads, for example.  However, she resolutely refuses to play with anything that is officially labeled a "cat toy." Mechanical mice and balls with bells are routinely ignored.  To play with such a thing would be eliminate the necessary element of thievery, the joy of playing with something that she has taken from us.  Even if that thing is something we have cast off -- the paper wad, for example; it is still something that once belonged to a human and it must be whipped into submission.  She's working her way up the ladder, starting with the domination of our things, as part of her ultimate plan to bend us to her will.
I think I have taught her to play fetch.  We both know she is training me.  As I sit at my desk, I feel her stare.  She eyes me until I turn around to look.  Just sitting at the table means, to her, that I have given my consent to Play the Game.  A rubber band is dropped at my feet, and her sweet little meow signals that the game has begun.  If I don't pick it up in the time allotted, however, a growling Penalty Meow is delivered.
I bend over to pick up the rubber band and then sling it across the room, hoping to buy myself at least thirty seconds to return to my work.  She streaks across the room and retrieves it in a record 5.5.  Another meow signals the start of Round Two.  Sighing, I put down my pen and reach for the rubber band.  Not finding it at my feet this time, I ask, "where is it?" She leads me to its location with her gaze.  She has dropped it near me, but this time, it's just out of my reach.  Yes, she is training me, putting the rubber band a little farther away each time. I sigh, not wanting to get up.  A head butt and a fierce Warning Meow indicates a play clock violation.  She watches approvingly as I get up from my chair to retrieve the rubber band.
This time, I fling it into the next room, hoping to buy myself more time.  She reaches it in a flash.   Dissatisfied with my delivery, however, she oh-so-accidentally flicks it under  the couch.  Now, it's just out of her own reach.  She glances back at me with a look of disgust, to let me know that this is my fault.  Dejected, she slinks away.  It's time for a nap, I assume.   I get back to work.
Thirty minutes later, I hear a noise in the bathroom.  I go in to investigate.  There's no sign of the cat who has left her calling card with dirty paw prints all over the white bathroom vanity.  Why drink from a cat bowl, degradingly placed on the floor, when when the leaky faucet delivers droplets of delectable fresh water like a champagne fountain?  No self-respecting cat would.
I'm cleaning up the mess when I discover my toothbrush on the floor.  In the bathroom.  Behind the toilet.  I'm horrified and disgusted.  She plays with my toothbrush when I'm not looking?  To the cat, nothing is sacred.
"Ashlynn!" I yell.  This time, she's gone too far.  I accept that she's 'still a kitten,' and that she's playful by nature.  I know that she gets on the kitchen counters when we sleep to lick any plate that has been foolishly left out over night. And I get that round cork coasters are quite obviously kitty Frisbees just waiting to be flown.  But she MUST learn that there are some things that are off limit, that there are SOME  boundaries that must be respected.
I find her sleeping on the bed, as if she's been there all long. She cracks one eye to see if I'm falling for her ruse.  I let her have it.  I give her The Speech, the Talking To, and the Ultimatum: "leave my toothbrush alone or you will be going back to the pound where we got you!" She yawns.  We both know that my daughter would never allow that to happen.  She would lay down in front of the car before she would let me take her beloved Ashlynn anywhere, except out for treats.
A shiny thing on the floor under the nightstand catches my eye.  I turn on the light and crouch to pick it up.  It's a long-lost hair clip.  "Ashlynn, where did you find this?"  I croon.  I'm ecstatic!  I thought I would never see this again.  It's nothing of value to anyone else, but to me it's priceless because it belonged to my mom.
Ashlyn gets up and rubs my hand, as if to say, she knew it all along, and that she provides me with innumerable services that I fail to appreciate on a daily basis. She thinks it's about time I acknowledged her efforts.  She's let me know that she's the only one in our household that sees the redeeming value in all things.  Everything is worthy of play and attention.  Nothing escapes her attention.
To the cat, everything is sacred. 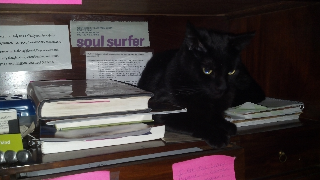