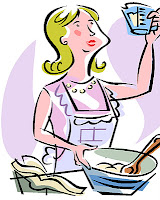 Emptying the dish of homemade tartar sauce, left uneaten because it wasn't pristinely white like store-bought, it occurs to me to ask, "when did homemade become suspect?" I do recall a time when homemade food was highly prized, and the store-bought versions found wanting; when a homemade roast or pie was met with an approving sigh of admiration and expectation. I feel certain that this must still be true in some households, the child-free households and in those homes where the children have more refined tastes.
In mine, however, my children eye the homemade croutons suspiciously and ask, "did you MAKE these?" and then they are pushed to the side of the bowl. The offer of homemade waffles, the kind I used to make from scratch when they were toddlers, full of whole grain and organic ingredients, are now greeted with a "no, thanks. Do we have any frozen?" My homemade soups are met with scorn, and they willingly heat their own bowl of canned.

I suppose part of the appeal of packaged food lies in the Uncertainty Factor which is a characteristic of my cooking (and one which I inherited from my mother). While my mother-in-love creates dishes which are identical in appearance every time she prepares them, there’s a good deal of uncertainty in how anything I prepare will turn out “this time.” Growing up, “well, it tastes good,” was our family meal-time motto.


For my son, especially, absolute consistency in appearance seems to be his most reliable means of determining whether or not he will be comforted ~ or nauseated ~ by his next bite. Frozen pizzas and mac & cheese  always and reliably look ~ and taste ~ the same. My cooking…not so much. And given the inherent variability of fresh fruit and vegetables, they must be very carefully inspected to avoid unwelcome surprises. New species and varieties are shunned.
My doctor says that the food kids eat between birth and age three determines their long-term food preferences. She says that adults can and do 'recover' from their junk food habits of the teen years, if their earliest food experiences consisted of healthy choices. I hope to goddess that's true because they ate nothing but organic cereal, and homemade baby food at those ages. So I dearly hope, pray, and trust the day will come when they long for the good ol' days of blanched kale and pureed quinoa. Just when will that kick in? I don't know. I can only hope that my organic, plant-strong, pescatarian diet, daily exercise regimen, and conscious living will allow me to live long enough to see it!
Posted by Cheryl Leutjen at 9:57 AM