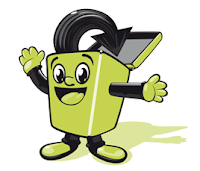 I can make the simplest things very difficult, usually by thinking about them far too much. For example, I have a hard time throwing things away. Even things that hold no meaning and serve no purpose, not in my life, anyway. Those stupid, cheap toys that come in fast-food kids' meals, for example. I look at them and think of the kids who work in the sweat shops to produce them for ten cents a day and the environmental damage caused by the petroleum that was dug out of the Earth, hauled around the world, and combusted. Worst of all, I picture that piece of plastic junk sitting in a landfill for a few hundred years. Everybody knows plastic doesn't biodegrade for a few millennia, right?

Of course, modern landfills have rendered the biodegradable / non-biodegradable distinction virtually meaningless. Modern landfills cover up new additions so quickly, in an effort to prevent any potentially offensive sights and smells, that the natural process of decomposition is interrupted. Garbologists have cored into landfills and found packages of meat dated some forty years earlier that hadn't even begun to decompose (see Rubbish: The Archeology of Garbage). Food that would go bad in a couple of days on your kitchen counter doesn't decompose in a modern landfill in forty years. I can't imagine how long it would take for a plastic SpongeBob. So I picture everything I throw away, all those things that can't possibly be recycled, sitting there in the ground in perpetuity like some hideous monument to our utter disregard for our most generous host, Planet Earth. Where is Wall-E?

Since clearing out my mother's house, I have accumulated a lot more stuff in mine. I brought home boxes and boxes of her things that I wanted to take time sorting. It's been nearly eleven months, and many of them are still here. Landfill Guilt is a big part of the reason why. There are a lot of perfectly good things in there that people don't want, need or use anymore. Other things that have sentimental value, either to me or to my Mother. What to do with it all? I find homes for things that are still useful. I donate those things the charities will accept. I recycle what I can. Still there are boxes and boxes of Other Stuff that I don't know what to do with.

My indecisiveness about the fate of simple objects was hindering my healing process. I had to do something. So I had a talk with Mother Earth. I explained my dilemma. I told her that I feel a deep love and reverence for her. I explained that I also need to remove things from my house that don't seem to belong anywhere. I explained that I need to do a major physical clearing in order to support my emotional clearing.

She could not have been more understanding. Now, she does abhor mindless production and proliferation of trash and pollution. Having said that, she does welcome back what is hers. There is nothing that we have in the physical plane which did not come from her. She receives it all back with the love of a mother who embraces a long-lost child. Our human-centered awareness of time has no relevance for her. What seems an eternity to us, is a blink of an eye for her. She will transform, rehabilitate, and reorganize that which has been returned to her in her own time.

I can't tell you how much this conversation relieved my landfill guilt. I still think twice before tossing out my old teddy bear. I still post a lot of things craigslist. I still cringe when my kids ask for toys encased in excessive wads of plastic. But I have changed the way I think about all these things. They are all gifts from the Mother. And she does not mind re-gifting.