She Did it Again 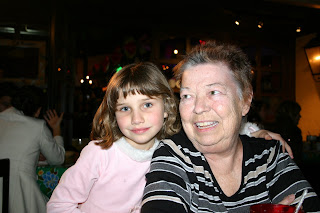 My mother's Red Hat friend, Edie, said it best, "Shirley would often leave suddenly, usually without telling anybody. We'd just look up and say, 'where did Shirley go?' She did it again." She would do that at my parties, too. She never liked to wait around for anything. When she was done with something, she wanted to move on, and that included parties.
So we really should not have been surprised when my mother left this lifetime rather suddenly, without saying good-bye to anyone. She had known for nine months that she had small cell lung cancer, but she steadfastly believed that, with positive intentions for healing, she would recover. She had survived breast cancer, and she would survive this. She refused to participate in any conversation that even suggested she would not live until a ripe old age, as had her mother who lived to be ninety-five.
She didn't wax nostalgic about times she would miss with her children or grandchildren. She didn't make plans for disposition of her things, other than the will she had created years ago. She didn't try to make amends with any old adversaries, if she had any. She didn't even want to see her closest friends "until I feel better." I am glad now that I made sure that she spent time with them in her final months, even those that lived miles away. But she sure didn't say good-bye to any of them or to any of her family either. Her mantra was simply, "I will, when I am feeling better, " and she was convinced that she one day would.
As much as I got frustrated with her unwillingness to talk to her about her 'final wishes,' I had to admire her courage and determination. I firmly believe that our thoughts shape our reality, and I try to choose my thoughts carefully. It's a relatively new habit I'm trying to develop. I spent most of my life playing the 'blame, complain, and justify' game. I still go there, but at least I recognize it now, and sometimes I am even able re-frame what's happening. It is still hard work.
My mother and I were growing along parallel paths, in many ways, and I know she was working to improve her ways of thinking as well. Still I am amazed that, in the face of an aggressive terminal illness, she was able to set her mental compass toward the positive with such resolve. Perhaps she had moments of doubt in the still of the night, but she was back on top when the sun rose in the morning. I have learned from her example.
In the end, she needed more than courage and determination to overcome her destiny to move on at the not-so-ripe old age of 68. As much as I miss her, I like to think she had learned what she came here to learn -- and teach what she came here to teach -- and in a shorter time than many of us do. She always was a quick learner and eager to share with others what she had learned. I am glad she hung out with all of us, her poor students, as long as she did.
After all, my mother was right. I know she is still with us, and she is feeling much better now.

Posted by Cheryl Leutjen at 7:15 PM